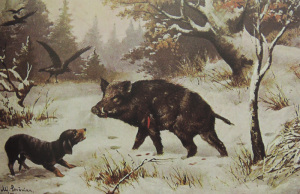 If you know the dachshund, you can’t help loving him.

He’s often referred to as “the nicest dog in the world” and his shape, with a long body and the short legs, the funny nose and his sweet big eyes certainly contributed to his fame.

Nevertheless don’t be fooled by his aspect, as the dachshund has a remarkable and strong personality, which clashes with his small size and makes him unique compared to all the other dogs of the same dimensions.

The dachshund has a strong and brave temper, he’s afraid of nothing. His courage makes him confront and fight with way bigger dogs, without any problem.

He is very intelligent and learns fast. But he is also bold, stubborn and independent, and has a natural inclination towards leadership. This makes him need a firm leader who knows how to correct him from the beginning, giving clear indications, coherent and non-contradictory orders.

With a weak and permissive master, the dachshund will turn into a little dictator, and will impose his own will.

Once the dachshund identifies his master as the leader, he places his full trust in him, and becomes docile and meek.

Loving, patient and sweet with his family and with the kids, he will protect them from anything he perceives as a danger.

This makes him suspicious of strangers and turns him into a watchdog , with an aggressive attitude and barking loud at any little noise.

The dachshund is a lively, cheerful, playful dog, he’ll surprise you all the time.

When he runs, reaches speeds unthinkable for a dog-legged so short.

Due to his inborn curiosity and his nature of hunting dog, he’s always in motion, looking for possible preys.

Basically, we can say the dachshund is an incredibly intelligent and irresistibly funny “little pest”. But don’t forget that each and every dachshund has his own character, coming from the different composition of his breed peculiar traits, by his pedigree, by the education he received and the environment he lives in.

In any case, whatever character he has, the dachshund will make fall in love anyone who shares one’s life with him, to the point that one won’t be able to imagine any other dog at his side.